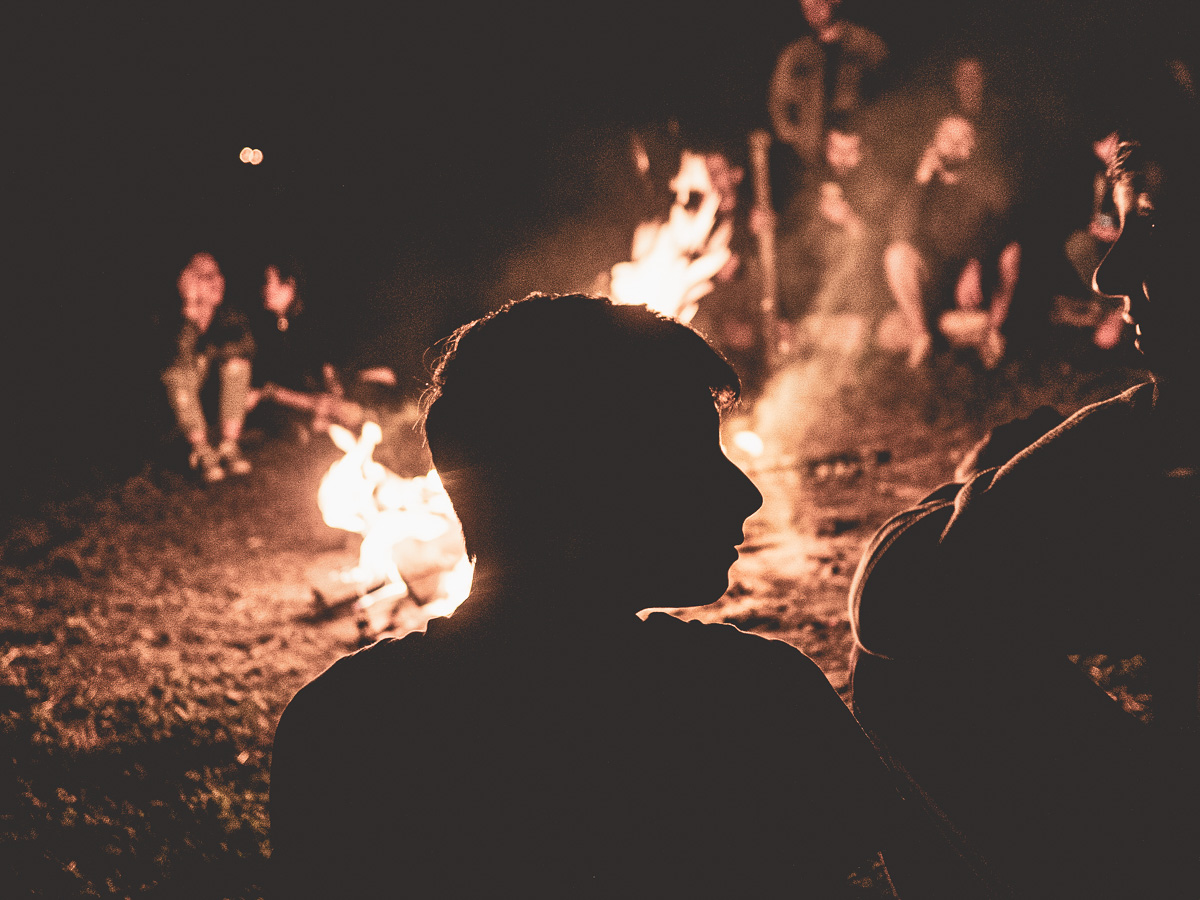 Daro warned me that a party would take place in Shenako on the day our trek would end — lucky us. The party has already started when we arrive dripping with sweat. Big tents have been set up for the occasion: one for the women, another for the men. While the women’s tent seems adapted for a long family banquet, the men’s is dedicated to a completely different activity: drinking. I know where I’m going to spend my time… 🍻

A few days ago another accident happened on the road to Tusheti claiming the life of four people. There will be no dancing nor singing during this festival out of respect for the deceased. We settle in the women’s tent for lunch. A little old lady with a sparse dentition is happy to see Céline enjoying her — very sweet — red wine and toasts with us every few minutes. « Gaomajos! »: « May the victory be ours! »

The men’s tent is shaken by raucous and manly laughter. Unlike the women’s where everyone was seated quietly, this place is driven by excitement and chaotic. We are obviously offered to drink. A big, strong guy in his fifties, dressed in military pants and rangers, invites us to sit and try a home-brewed beer with a fresh and light taste. « Here we are in a democracy. If you want to drink, you drink. If you don’t, you don’t drink! » he shouts in my ear. Does he really think I’m going to watch him drink while sitting still? 😅

The tradition in Georgia is to raise a toast before drinking. No one touches their glass until the tamada, the master of ceremony, has finished speaking. The tradition of the toast is still obscure to me but I invite you to read this if you are interested in the subject.

The man with the rangers raises a toast to our friendship. A good natured chap in his fifties joins us. He doesn’t speak English well but proudly shows us on his smartphone the paintings he exhibited in Italy. Another one, even more ebriated, comes into the tent with his horse as everyone prudently moves aside. He swallows a cha-cha then leaves. But it is out of the question that we leave without having tried a game. With Michael, a German guy who was hanging around, we are invited to the game of “beer in a horn” in which you have to drink the whole content of the horn as fast as you can then scratch your back with it when you’ve finished. The young Georgian who was our opponent obviously won both games. 😣

The afternoon has barely started that the party seems over. Youngsters are acting shy in front of the camera. I join the elders, sitting on the floor, chatting while nibbling on dried fish. I raise my first toast in honor of Tusheti’s fish: awkward silence. I think they think I’m weird, but find it hard to get into this tradition. Sometimes I am handed a glass and as I am about to drink it I am asked to wait for the toast; other times I wait for the toast and am asked to drink my glass quickly because we only have one… and sometimes the toast turns into arguments and bickering that last forever…

A grandfather arrives with his grandson. He seems to be very attached to him, cuddling and playing with him with a tender look as I have rarely seen in this country where feelings are not openly displayed in public. I am asked to give a toast in honor of his son who died two years ago in a car accident. I feel uneased. Ten minutes ago I was raising a toast to Tusheti’s fishes, now I have to raise one to a dead man I don’t even know. I do my best, they translate what I say. The old man looks moved and wants us to take a picture together. It’s my turn to be touched.

Chat by the fire

The sun is about to set while the youngsters play soccer with a few drunken elders. A father is lying on the lawn and playing with his children. The Georgians that I found gruff and distant now appear under a softer light.

Night falls on the village of Shenako. Teenagers gather around a big camp fire, alternating laughter and glimpses on their smartphones’ screens. They ask me if I put my pictures on Facebook or Instagram. I answer that yes, it happens. Suddenly I am surrounded by a bunch of friends. These teenagers that appeared shy a few hours ago actually speak English very well. They invite me to sit down, bring me beer, want to know where I trekked and ask me a lot of questions. I feel like an adventurer returning from a distant land in the last century. They have a sharp mind and I have the chance to have interesting discussions with them. They explain to me that it hurts them to see that Tusheti, which is so dear to them even if they only live here during the summer months, is modernizing that fast. They do not want their region to look like the Black Sea coast, the Georgian Riviera. Even if the rest of the year they live lower down, in Alvani or Telavi, Tusheti is part of them and they are attached to it. I can not disagree.