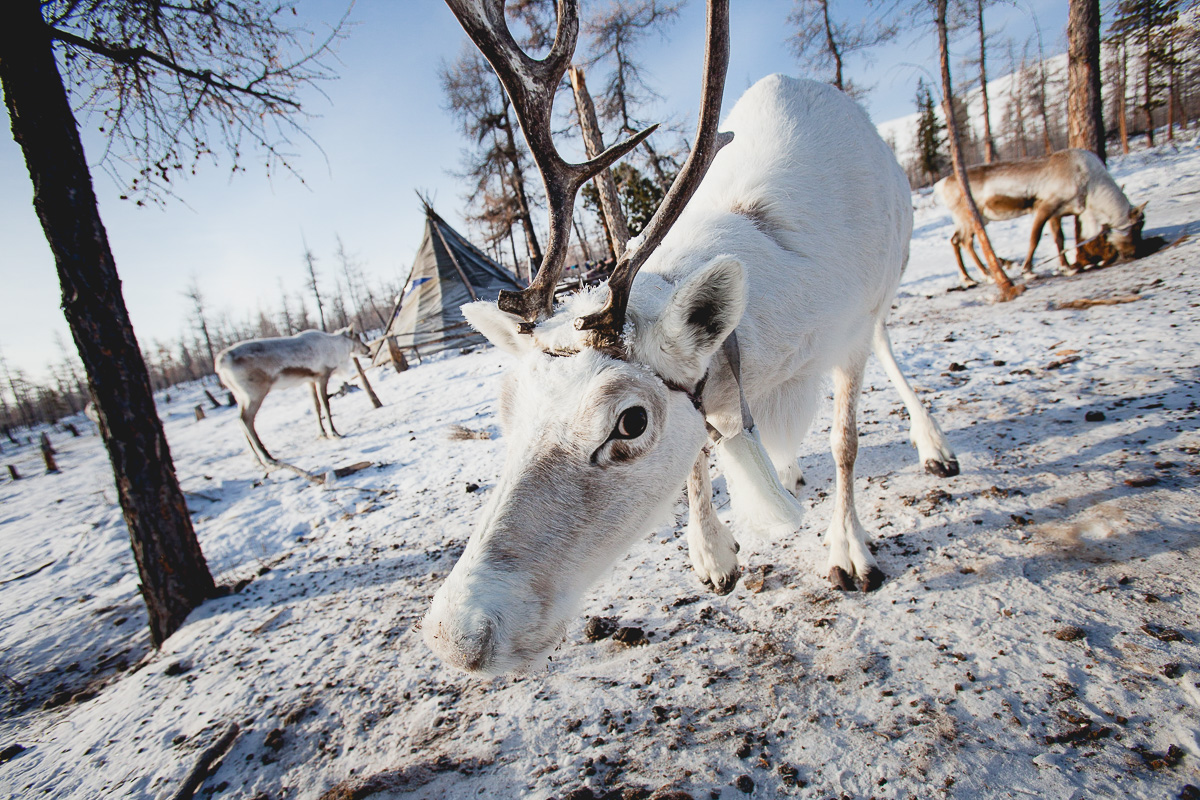 Tsaatans — Living With the Reindeers

I didn’t really have time to rest during the few days I spent in Khatgal. Sitting in the car between one of the wrestlers I met yesterday and the frozen carcass of his horse, we drive towards Mörön at the pace of an overloaded car. There, he will sell his meat and I will take a minibus and reach the winter camp of a group of Tsaatans, the Mongolian reindeer herders. Let’s go to the taïga!

Driving on the Ice

Because of the low temperature, Lake Khövsgöl is considered frozen enough to be driven across — a discordant opinion as the recent ice festival has been canceled. The minibus is packed, and it’s better like this. Of course, it means that I have to forget about comfort, but being squeezed also means being warm. I don’t feel comfortable at the idea of driving on a lake in an overloaded vehicle. Also, knowing that going across the lake by night implies a risk of getting lost doesn’t help — Lake Khövsgöl is 136km long and 36km wide. I have no choice but to commend my life into the hands of the driver.

A lunar landscape passes before my eyes and I almost forget what weird thoughts remind me soon enough, we are driving on water: — What if the ice breaks? — Considered how far we are from civilisation, I am not sure any of us would survive… — And what if the minibus breaks down, huh? Did you think about that? — …

Night has fallen altogether with temperature. The driver stops and goes out. Heads twist and turn, trying to see what’s happening. I can read a mild worry in the eyes of the passengers in this metal box. The driver comes back and the trip goes on. Half an hour passes, maybe even an hour. I experience some difficulties with time since I’m in Mongolia. Then he halts the bus again. Why does he have to turn off the engine every time he stops? Puff-puff-puff… Will it start this time? You already know the answer since you’re reading those lines. Driving on ice has got an advantage: it’s flat, relaxing. However, I can’t fall asleep; who knows why. Would it be the frost-covered window on which my face gets stuck? In any case, my neighbour seems to appreciate my shoulder. I observe the moon through the window of the roof. And then, we stop again. Suddenly, everything shakes. I can feel the minibus climbing an incline. The tense looks become relaxed, tongues are loosened and the radio is on. There is definitely a universal language among humans and I understand that we just landed. Phew!

Hours pass by. Sitting in a very uncomfortable position, I can’t feel my toes anymore and I envy the reindeer skin boots of the lady in front of me. At least, she can sleep. Too numb to be concerned about my reluctance of contact with strangers, I huddle against my neighbour. My eyes close, my soul gets away for a moment… and we stop once more. Brutal waking up for a warm pause at one of the passenger mother’s yurt. She gets her son back before we set off again. I go back to sleep, we’re arrived. How long did it last, one hour? Two hours? Ten minutes? Once again, I have no idea. The only thing I know is that we left almost ten hours ago. In the house of my hosts, I am blessed with smiles from ear to ear, hot tea and cream stuffed cake. Children are curious and the few words of Mongolian I have learnt make the family laugh. I feel in tip top form. No luck, it’s time to sleep.

Driving through the Taiga

Waking up around noon, right after the family. I am not riddled with guilt. Neighbours come to visit us. Tea, biscuits, a hot meal, … then a bottle of vodka: a few friendly drunkards came. Then starts an armchair debate between their rudimentary English and my Mongolian, even worse. We speak about Gengis Khan, Napoleon, Staline, Hitler, … Bush, Sarkozy; “Same!” exclaims my new friend before bursting out laughing and translating the discussion to his friends. The driver just finished checking his Jeep, an unbreakable relic that needs to be cranked. We can go.

Click, click, click, … Vroooooom! With a thunderous roar we drive towards the taiga. I was complaining about the lack of comfort in the minibus only because I didn’t know what to expect. I am worried by a bunch of electric wires dangling next to the gear lever. Rightly. Between two wedges, a thick smoke comes out of them. Emergency procedure, everybody out of the car! Luckily, no fire, nothing more than smoke. I always carry with me a thick roll of tape that I use to fix approximately everything. I propose some to the driver. He fixes the car. I can already imagine the face of the mechanics if they knew that we could fix our cars with tape…

We arrive safe and sound at the Tsaatan’s winter camp. The ground is still covered by snow. A welcoming committee — of the hairy kind — weaves in and out of the pine trees, sniffing us and asking for caresses. Once accepted, we walk towards a small wooden house where Gamba, one of the village chamans, lives with his family. I will quickly learn that this is the place where everybody comes to hang out. Following the tradition, we walk inside — without knocking at the door — and sit down for a tea. There, I am proposed a family to live with for the nine following days, at the winter pace of the Tsaatans.

Getting out of the five layers of woollen blankets, ultimate shields against the frozen nights, does involve an extra effort. As I walk out of the teepee I can see the morning fog crystallising into tiny diamonds that sparkle in the air. As they see me, reindeers stand up straight and stare at me with black and globulous eyes expressing both suspicion and curiosity. My stay with the Tsaatans starts here at the pace of winter.

Living from reindeer doesn’t only mean living by its meat. As the other people depending on this animal, the Tsaatans use reindeer for everything: transportation, food, art, etc.

Our reindeers’ steps sink deep into the powder snow. Around us, only white taiga and silence. A feeling of well-being overwhelms me. Despite its adapted hooves my mount looks odd with its round eyes and a protruding tongue. Yet I am quite thin! I feel sorry for the poor animal carrying my friend Oko, right in front of me, which is about twice my weight. Anyways we reach the summit, an arid berm covered by frost and blown by cold and constant wind. A stunning panorama unfolds on Tsaagannuur (white lake) and the white chain of mountains at its edge. From up there it’s like if we were the only humans on the planet. No trace of our species anywhere, even in the perfectly blue sky. One exception though, the altar made of stones on which we pay tribute to the spirits by burning juniper and scattering droplets of milk that freeze in the air.

We ride back down to the camp, frozen to the bones. The dog that came with us has another idea. I watch her climbing this summit eyeing me up. From there, she gives a look at us and runs like crazy in the deep snow. A bestial incarnation of happiness.

At the pace of winter

Half an hour and a fall later the winter pace catches me up: – Enter at a neighbour’s place – Sambeno! (Hi!) – Drink a hot tea, sometimes with reindeer milk and its fruity taste – Eat the biscuits and the meat & pastas soup that are offered to you. Sometimes, if you’re lucky enough, you can be proposed some “sausage” — meat-stuffed reindeer intestines, a rubbery experience! – Smoke a cigarette (if you’re a smoker) – Possibly play one or two games of poker — the local kind – Bayalta! (Bye!) – Enter to the next neighbour’s place. Useless to say that after a couple of these visits my stomach orders me to stop being social. Then comes the moment to watch time pass, an absurd concept for our westerner mind. Time is a luxury to us; here I am a billionaire.

Despite this peacefulness it can occur that your heart panics. That’s what happens to me on the way to a teepee yet unknown. A dog runs towards me, stops bare fangs, and barks at me. He is quickly followed by an other dog, and a third one. Becoming buddy-buddy is not worth considering. I have no choice but to face up bare teethes in an attempt to intimidate them. Nothing can be done, I am frightened and they can feel it. They take one step backward then two steps forward before trying to circle me. I panic and almost fall in the snow. I need to get hold of myself. Inhale, exhale… I feel calm again, keep on facing up to the dogs and back up making sure they do not circle me. Step by step I get closer to a teepee. Phew! Saved! Despite this frightening experience I will go back there tomorrow but this time, more confident, I will reach my goal — photography is often a good way to stretch your limits!

Women’s day — Everything is a good reason for a party!

Winter in the taiga is long and days look more or less the same. What better way to break this monotony than by having a party? There is a worldwide one that you’d better not miss: the women’s day. Everybody takes out the bottles hidden under the bed and here we go! From teepee to teepee, one invites each other for a drink. Beer, red wine from Germany(!) and Bulgaria (!!), and of course vodka.

Women of the village met at Gampa’s house — the chaman — around the table and fill up the only glass before passing it to each other. They challenge themselves while men are taking care of the cooking and wait for their turn. As night comes, it continues at our place: about twenty persons under a teepee, the party is in full swing! Some try to marry Tsarko, my host, to Valérie, a French lady that came to spend nine months here with the Tsaatans. Laughs give place to music. Traditional songs are sung, a guitar — fixed with cord — is played… then the lights are switched off and the radio on. For a moment the teepee becomes a night club. Everybody is dancing, faces are redden by the glow of the stove and they look like some disturbing masks of fire. The magic shades off as fast as it came when the awful light of the led reappears. But in a few seconds the teepee is abandoned. Party is over.

Winter pace or not, nine days fly by. Sun is shining and weather turns warm. Dogs are sunbathing and the camp is basking in a picnic atmosphere. There are unmistakeable signs, spring is coming. The Jeep too, heavily loaded. But why are there so much toilet paper rolls in the trunk? Maybe because it is kind of a supermarket on wheels…

Now is time to open up a couple of beers and to knock back another bottle of vodka while smoking cigarettes. Happy hour, kind of. One hour later we squeeze into the car. The driver pushes the crank handle. Vroom! This is the end of the adventure. There is only one thing I will not miss: reindeers running towards me when I pee — for the salt contained in my urine, ahem… 🙈