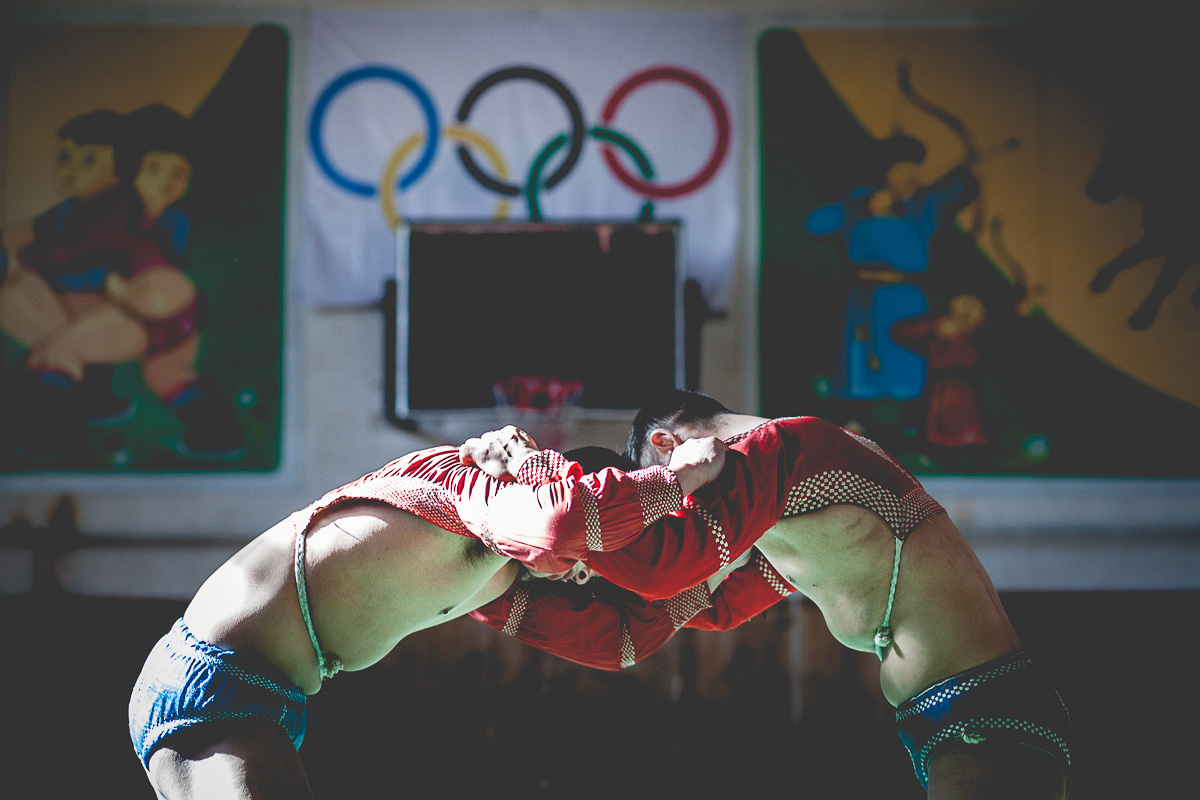 To say goodbye after such good times under the yurt is a difficult moment. I embrace them and wish the best to their family, and it is with a lump in my throat that I get on Honda’s motorbike – no intentional pun here! – towards Khatgal. Tomorrow starts the Ice Festival during which I may have the chance to experience, among other celebrations, an event which the descendants of the Khan are fond of: a Mongolian wrestling tournament, the country’s national sport.

Bad news: the authorities decided to cancel the festival. Most of the activities are supposed to happen on the lake but due to cool temperatures last week they fear the ice layer might be too thin to support the weight of the visitors. However, it is very likely that the tournament will take place anyway. It is about noon the following day when someone enters my yurt – in Mongolia we do not usually knock on the door. In a matter of five minutes, I can find myself in the school’s gymnasium where the tournament is about to begin.

Little by little, the public fills the gymnasium, warming the atmosphere. The first wrestlers get dressed with the traditional suit: a brief, a kind of arm-covering shirt, and of course the wrestler’s hat. More than just a traditional part of the outfit, the hat has also a descriptive role, like a resume of each competitor’s wrestling past. A medallion with the shape of an animal, like an eagle or an elephant, is sewn on the front of it and shows the rank of the wrestler. Attached to the back are two kind of ties: one shows the number of victories, the other the number of times the owner finished in the top four. Any wrestler can then quickly see whom he has to deal with. Because this tournament is not a major one, some of them do not wear the whole traditional cloth, sometimes even not at all – “it’s because they are lazy or cold” will later confess my host, an ex-wrestler himself.

There are no categories in Mongolian wrestling. Whether they are skinny or fat, small or tall, young or “old”, … wrestlers fight each other on the same ground, a couple of fights at the same time. The ceremony begins with an eagle dance around the flag of Mongolia followed by stretching movements and a few slaps on the thighs. Before starting the fight a referee pulls out the hat of a wrestler as the latter performs another dance around him. A slap on the arse – sometimes quite a strong one, provoking laughs among the audience – and the fight begins. Rules are very simple: the first one whom back, bum or knee touches the ground loses. Hitting your opponent or strangling him is of course forbidden.

Weird catches, spinnings, liftings, … This spectacular succession sometimes end up in the public, to the discontent of the referee who then stops the fight in order to avoid any risk of injury. Usually not fond of any kind of sports, I am taken by the show. I already have my favorite, a guy with a wild and hard-nosed look, extremely aggressive, but who will not win this tournament. Yet I would have bet he would win only by seeing the way his opponents were dreading him. But Mongolian wrestling is not only about brutality. I also found in this sport a certain subtlety, especially around the end when the exhausted fighters need to spare their energy while finding a way to win. Opponents look at each other for a moment that can last forever… until the penny drops. Then, muscles tighten up, breath gets short and catches follow one another at lightning speed, inexorably leading one of them to the ground, stroke down. The crowd explodes. The winner helps his opponent to lift up, they salute each other, get their hat back and perform a last dance around the flag.

Hours fly by and tournament ends. Winners are announced, photos taken. I can recognize some familiar faces among the audience. We salute each other and try to exchange a few words. If only I spoke Mongolian, I would almost feel at home. This tournament was a little one, giving me a lot of photographic opportunities as I was practically allowed to go wherever I wanted. I am delighted I could experience this and convinced that the atmosphere of the major ones – which fees can be excessive – is totally different, thus I would have missed something grand.