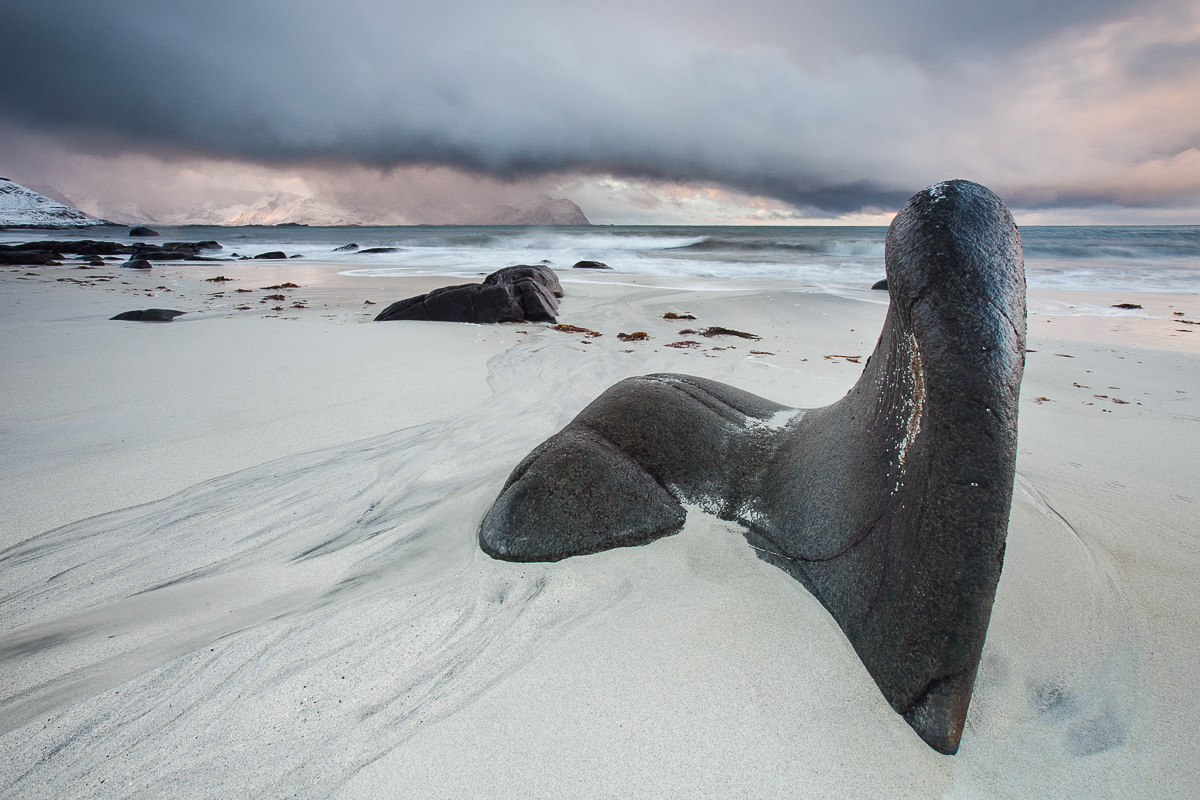 Lofoten in Autumn — His Majesty the Climate

This post being a condensed version of multiple posts, it’s a bit longer than usual 😊

Sleeping at Oslo airport has been nothing but a delight. I must have spent something like one hour in the kingdom of Morpheus, sitting between two darned snorers, trying to fall asleep with some music while my head was falling on one side or the other. Anyways, I eventually reached the flight to Bodø from which I took the – almost empty – ferry to Moskenes, Lofoten.

As crazy as it might sound, I have rarely seen such a sky in this area of Norway. Blue. I mean, really blue. Not a single cloud. It feels like summer time here. A perfect weather for an easy arrival, falling asleep and dreaming of these islands appearing bigger and bigger every time I open my eyes… before falling asleep, again.

As the boat reaches the little harbor of Moskenes, I can feel this strange sensation that comes to me at the beginning of every new adventure. A mix of curiosity, happiness and one of the few moments I can totally feel free from oppression, simply seizing the moment.

My first destination will be Bunes beach. After another enjoyable ferry trip to Vindstad, a typical village in the middle of nowhere, a short walk leads me to this unbelievable place. Stuck between two massive rocky cliffs, the beach is stretching for more than 500 meters until it finally reaches the sea. I still do not understand how such a geological formation can happen, but understanding this will definitely not be the subject of my bivouac. So much things are to be photographed, I need to quickly pitch my tent, enjoy the solitude of the place for a moment and go to work.

During the first night here I have not been really conscious of how lucky I was to have such a weather – usually frustrating for photographers for its absence of clouds – but the mistake has been quickly fixed the second night. At first, stars began to show up little by little, shyly, giving me in the end the clearest sky I have ever seen. But the welcome party did not stop here. A few minutes later, it looks like faint glows are taking form over the sea. Could it be northern lights?

Bluffed by the last two days, I leave Bunes paradise for another. It is time for a last “homemade instant coffee” on Vindstad beach before taking the ferry back to Reine. Following the advices of a local (Sandro, if you ever read me…), I will spend this night on the top of the hill. Once again, I will be enthralled by so much beauty. Imagine pitching a tent upon a hill dominating at the same time a town, the sea and a gorgeous fjord. It is a strange sensation but I kinda like it. And once the morning lights show up, the autumnal birches explode with colors.

Of course, it could not be so simple. Great weather, clear night skies and auroras for my first days in Lofoten, … “Come on! Did you really believe it would last like this for ever? Wake up boy, you’re above the Arctic circle, and furthermore in October”. Then The Almighty Weather decided it was enough easy moments, became angry and decided it was time for a lesson of humility. A lesson I have had time to assimilate during this whole week under my tent, a sham protection against the elements…

Everything began when I stepped out of the bus. Almighty Weather decided I should begin the initiation under a good old storm. As I was walking towards the beaches I wanted to visit, I passed by a range of mountains: ‘The Blowers’. Each time I passed by them, a strong wind hit me on the side, sometimes so strong that I could barely stand still – quite scary when you’re walking on a bridge.

The sky was grey, dark grey. ‘The Blowers’ were blowing hard and a thousand drops of rain fell onto me, trying to make my clothes wet. But I was well protected and determined. I didn’t fear them, neither I really feared the gale. My uttermost dread at this moment was the inability to take a good picture for the next week. This was however because I was still fresh and ready to fight the elements, as a young ignorant would have been. “Fight the elements… Ha! Ha! Ha! Then what would you think of a full week of strong winds and rain?”. And then the week of wind and rain was.

Thus I went on the wonderful beach of Kvalvika for a couple of days, as if nothing happened. This place is quite famous since some surfers built a hut and went surfing for the whole winter here a couple of years ago. The beach was a hidden jewel with plenty of hikes all around. However His Majesty the Almighty Weather was stubborn and sticked to His idea.

The tent was shaking day and night, gales coming from another direction every time. North, south, west, … Anywhere I pitched it, there was no way to escape. Then I found out there was a stream forming under me because of the rain. I had to move, again… “Ok I admit it, oh Almighty Weather, you are the strongest. I apology for this pathetic rebellion and from now on I will submit myself to your rules”. But it was too late for such an apology.

Then I had to be patient and ready to jump out of my forever-shaking tent as soon as His attention was caught somewhere else, which let me a couple of occasions to make some interesting shots, especially playing with the lunar textures of the sand and the reflections of the surrounding mountains on the wet beach. But the light was still missing… He won this battle, but not the war…

No Place to Hide

These few extracts of my diary display perfectly what I have been going through this last week and a half in Lofoten. I just need to add that wind and rain have become recurrent (apart from one blessed day) and that hail has been invited today for some extra fun. I am still physically alright but my mind grows tired. Weren’t it for the next days’ forecast (sunny spells), I would have definitely stopped this adventure. Come on weather! Give me some beautiful lights (or at least some lights) and auroras for the two next days and we will be even, alright?

I am slowly awaking from slumber. Night has been quite cold and I am waiting for this gale to end before getting out of my tent and pack everything as quick as possible – the next gale is never far away. As I slowly open the zip of my shelter as a child would open a Christmas gift, hoping for an hypothetic miracle, a surprise unfolds. Ground and mountains switched coats from morose green and brown to divine white, and sky from a constant flat gray to an ever changing mix of colors and textures. Seems like I am eventually getting lucky!

Odds have been turning out in my favor from last morning, in Å. Sky became blue after two weeks of a uniform and depressing gray. Not so good for photography but a delight for the moral. For once, I was leaving my ‘base camp’ thinking that interesting colors might finally show up today. It didn’t. One more night was required before the miracle eventually happened.

Then you already know the story: cold, storm, snow… It’s quite unusual to get so much snow here in October, but what a delight it is to see the capricious Lofoten again in their winter coat. Snowstorm, light snow, bright sun, then snowstorm again. I feel so lucky as this is the way I like them most and this is how the weather has become. Within an hour it switches from one state to the other a few times, meaning perfect conditions for photography even if it becomes indeed hard to walk straight and capture sharp images.

Frozen snowflakes whip me in a frying noise while I push my body against the wind. It feels like I am carrying twice my weight but I don’t really think about it. In these situations, my mind is focused on one single goal: make this next step towards the gorgeous light and shapes taking form a few hundred meters away. This is a heady feeling, the kind of sensation that makes you feel alive and definitely something I missed.

Then, nothing. Somebody must have pressed the ‘Pause’ button. Snow stopped falling down and wind got quiet. It is like if nothing happened; only lights and textures remain. Now it is time to unfold tripod, set up camera and filters, compose and shoot. I sure know I don’t have much time as the next storm is already profiling in front of me. It should be there in a minute. After a first warning gale, there it starts again. Strong wind and hard snowflakes are back, I have to pack everything one more time and continue on this endless path until the night comes, pacifying the raging Lofoten, giving the place a totally new atmosphere it will hopefully keep until next morning for a surreal sunrise…

I love it when a book finishes with a grand ending and am thrilled when an album ends up with an endless epic track filled with heady melodies; as well, I am lavished when one of my trips concludes right after memorable moments – if not the best. That’s why I decided to end this Lofoten adventure a bit earlier than expected after the last stormy days.

Snow is slowly melting and after a planned sunny day, temperature will rise above 6°C with a good deal of rain. Even if the optimistic part of me hopes for more snow, reason wins. I believe that the first impression you get of a place is important but am certain that the last one is crucial. That’s why I will not ruin it with a few more days walking and camping on slush after such fantastic moments. Bye bye Lofoten, hello Vesterålen! 👋