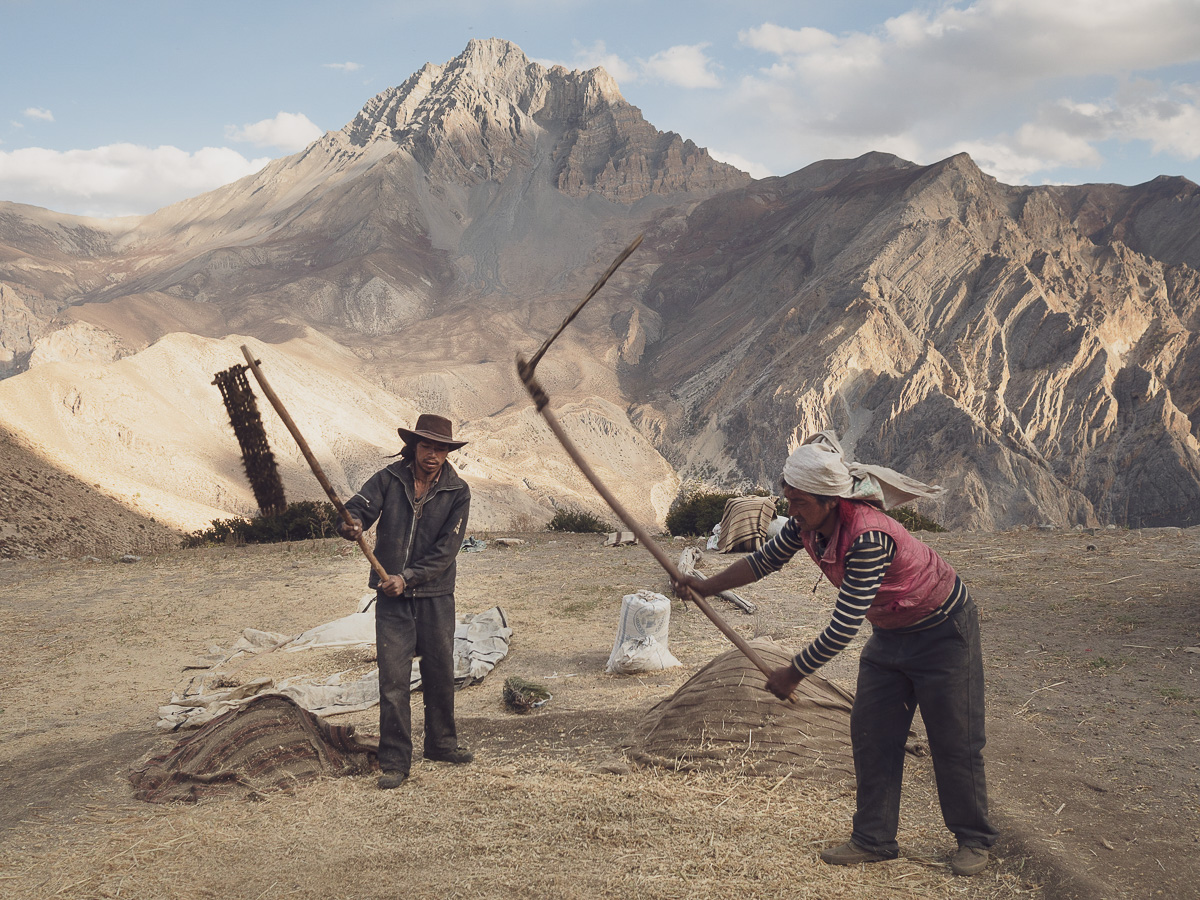 Dolpo to Mugu — Into the Remote Corners of Nepal (1/2)

Since I came back from my first trek in Nepal four years ago, I’ve been fascinated by the work of Eric Valli, a French photographer and film maker famous for his work on Dolpo, one of the most remote regions of the Nepalese Himalayas. While researching for this long-term voyage, I was secretly hoping to find a way to get there. Experiencing Dolpo with my own senses was a dream. One day, on my Facebook feed, I stumbled upon a post by Paulo Grobel – a French mountaineer and big fan of Nepal – about a forthcoming expedition to Dolpo. After a few calls and a short meeting in Kathmandu, it is settled : I’ll join the expedition.

In order to document the preliminaries of an expedition — and because I needed to keep the price as low as possible — I will follow the Nepali team from Kathmandu to Juphal, the starting point of our adventure. Using local transports instead of planes, reaching Juphal is no mean feat. It takes no less than two buses, four jeeps — one of which got stuck for hours in the middle of a river, another one was packed with twenty-three passengers! — and a two-days walk through some nasty, scary, twenty centimetres wide paths in a gorge with jackhammers breaking rocks over our heads. Unfortunately, the plane with the group would arrive only two days later because of strong winds… But in the end everything is all right and the adventure can start!

At first I am sceptical about traveling with a group. So far I’ve always travelled alone, sometimes with a guide, friends, or with my girlfriend. I am worried about not having the necessary freedom to photograph the way I’m used to. But these worries quickly disappear. The comfort provided by the good food, the overall mood of the team and the mules carrying my load is worth it. Does a photographer in a better shape provides better photographs? I bet it does!

This time, to my great relief, there is no hot and wet jungle to cross. The trek begins in an Alpine climate and after a couple of days the deep forests already fade into a landscape of bushes and dust. As we walk along the path over the famous Phoksundo Lake we all stand in awe of such grandeur (do you remember this scene in Eric Valli’s movie “The Caravan” where one of the yaks falls into a turquoise lake? That’s Phoksundo). The colour of the water contrasts with the stark surrounding landscape. Despite the terrible mid-day light, the lake is hypnotising.

From there, everyday is a new surprise. We soon reach the base of Kanjeralwa and its snow flutings, sharp photogenic lines of snow that made me fall in love with the Himalayas. Yaks begin to sniff their female counterparts’ bottoms and to fight each other. Under the glaciers, forests of birches in their yellow garments announce the close arrival of winter, soon to be confirmed by the frost covering our tents in the early mornings.

As we get closer to 5000 m, breath shortens and each step takes much more effort. After every high pass we brag about how many of them higher than Mont Blanc, France’s highest summit topping at 4809 m, we already went through. During the whole trek, we’ll surprisingly reach the total number of nine. The views on the way are breathtaking, making it difficult to stay focused on the sometimes dangerous walk. I often stop for a moment of deep contemplation, emptying my mind and feeling immersed into the magic of the Himalayas. As often will I leave with tears in my eyes. It is probably the only time in my life I will experience the rare vision of this remote place.

I wanted to visit Dolpo for its extraordinary well-preserved culture and way of life and didn’t expect such wild wonders. As we reach the summer camp of Shey Gompa I know I’m not going to be disappointed by humans neither. Dolpo is one of the few places in Nepal where one can still find practitioners of Bön, a religion coming from Tibet, very close to Tibetan Buddhism, apart from a few subtle differences — most of them being in the names of the protagonists. The gompas, be they Bön or Buddhist, have this religious, almost supernatural atmosphere unique to centuries-old buildings made of stone and soil, perfumed by incense, and enriched by the presence of religious paintings, statues, and books — sometimes older than the gompas themselves.

The kindness and hospitality of the inhabitants of these small remote communities is neither to be underestimated. In the small village of Pho – the end of the world for people of Dolpo, to quote anthropologist Corneille Jest – I spend most of my time with the villagers. Despite their being busy with the harvest, none of them is against having a good laugh. They happily share with me a handful of locally grown potatoes or a cup of tea in exchange of it.

Leaving Pho is a heartbreaking experience. The two days spent in this village really meant something to me. I can’t quite accept to let it go, especially knowing that for the next week we’ll see no such thing as a human settlement. As I walk up, villagers go down to their fields. I am invited for a last morning tea, am offered chhurpi, a dried dri — the female of the yak — cheese, and the traditional khata to wish me good luck. Now I feel ready to leave the village… until I see the sun rising behind the mountains. An auspicious sign or some old magic trick of the village god to keep me here? Reading so many Tibetan stories, I am becoming more and more superstitious.

Continue to the second part of the story…